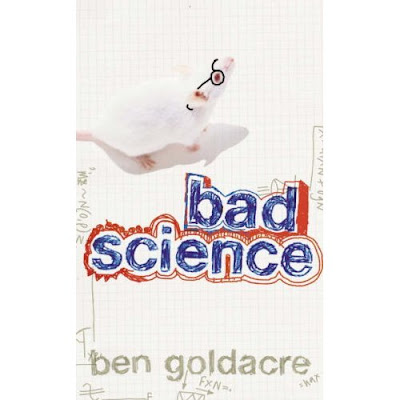 «When you’ve been working with bullshit for as long as I have, you start to spot recurring themes: quacks and the pharmaceutical industry use the exact same tricks to sell their pills, everybody loves a “science bit” - even if it’s wrong - and when people introduce pseudoscience into any explanation, it’s usually because there’s something else they’re trying desperately not to talk about.

But my favourite is this: alternative therapists, the media, and the drug industry all conspire to sell us reductionist, bio-medical explanations for problems that might more sensibly and constructively be thought of as social, political, or personal. And this medicalisation of everyday life isn’t done to us; in fact, we eat it up.
(...)
Before 1935 doctors were basically useless. We had insulin, morphine for pain relief - a drug with superficial charm, at least - and we could do operations fairly cleanly, although with huge doses of anaesthetics, because we hadn’t yet sorted out well-targeted muscle-relaxant drugs. Then suddenly, between the 1930s and the 1970s, science poured out an almost constant stream of miracle cures.

Everything we associate with modern medicine happened in that time: antibiotics, dialysis, transplants, intensive-care units, heart surgery, every drug you’ve ever heard of, and more. For people who were ill, the difference was spectacular. If you got TB in the 1920s you died, pale and emaciated, in the style of a romantic poet. If you got TB in the 1970s, then in all likelihood you would live to a ripe old age. You might have to take rifampicin and isoniazid for months on end - they’re not nice drugs, and the side-effects make your eyeballs and urine turn pink - but if all goes well you will live to see inventions unimaginable in your childhood.

Times have changed. The pharmaceutical industry is in trouble: the golden age of medicine has creaked to a halt, the low-hanging fruit of medical research has all been harvested, and the industry is rapidly running out of new drugs. Fifty “novel molecular entities” a year were registered in the 1990s, but now it’s down to 20, and many of those are just copies of other companies’ products, changed only enough to justify a new patent. So the story of “disease mongering” goes like this: because they cannot find new treatments for the diseases we already have, the pill companies have instead had to invent new diseases for the treatments they already have.»
Posted by Palmira F. da Silva at 10:51