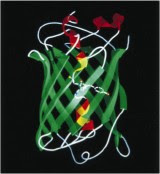 "Q. IS IT TRUE YOU SLEPT PAST THE PHONE CALL INFORMING YOU OF THE NOBEL PRIZE?

A. It’s true. (...) Well, on that night, I heard this phone ringing in the distance but assumed it was a neighbor’s. So I woke at 10 after 6 the next morning and assumed the chemistry prize had gone to someone else. I then opened my laptop and went to Nobelprize.org to see who the schnook was who’d gotten it. And there I saw my name along — along with Osamu Shimomura’s and Roger Tsien’s. I was the schnook! I woke my wife, Tulle: “It’s happened.” She said, “What? Have we overslept taking our daughter to school?”

Then, the phone really started ringing. It was a reporter from The A.P. who said she was in front of our apartment and wanted to get a picture of me. I said, “I’m in my pajamas.” She said, “That’s exactly the photo I want.” I said, “But you’re not going to get it.” "