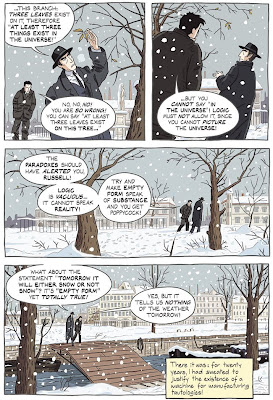 Well, this is unexpected — a comic book about the quest for logical certainty in mathematics. The story spans the decades from the late 19th century to World War II, a period when the nature of mathematical truth was being furiously debated. The stellar cast, headed up by Bertrand Russell, includes the greatest philosophers, logicians and mathematicians of the era, along with sundry wives and mistresses, plus a couple of homicidal maniacs, an apocryphal barber and Adolf Hitler.(...)"

A referência do livro é: