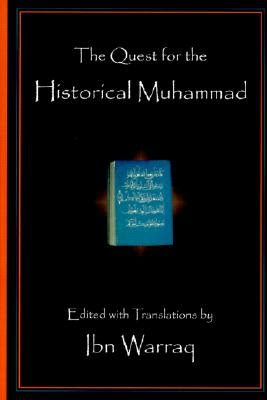 According to the evidence of Christian literature under Arab rule from the 7th and 8th centuries, as well as from Arab coinage and inscriptions from this period, such as that on the Dome of the Rock in Jerusalem, the new rulers adhered to a Syrian-Persian form of Christianity that rejected the decisions of the Council of Nicaea*. Instead, it regarded Jesus as the messenger, the prophet, the servant of God, but not the physical son of God, who is a strictly unitary being not "adjoined" to any person. The fathers of the Church, for instance, regarded John of Damascus (d. around 750) as a heretic, because his Greek understanding of Christianity did not correspond to their views. There is no mention of a new, independent religion of the Arabs before the 9th century.

Muhammad means 'the blessed one' (benedictus), and what the coins show is Jesus.... Muhammad was, following this, originally a Christological title, like the predicate God's servant ('abd-allah'), prophet, messenger, messiah. The predicate muhammad then broke free of its original reference to Jesus, and was historicised in the figure of an Arab prophet with the name Muhammad, while the second title, 'abd-allah', became the name of the Prophet's father. This historicisation of the Christological predicate took place in the first half of the eighth century. Toward the end of the eighth century and the beginning of the ninth, as the Koranic movement established itself as the independent religion of Islam, Muhammad evolved into the founder of this religion, and the events were relocated to the Arabs' homeland.

"My position with regard to the historical existence of Muhammad is that I believe neither his existence nor his non-existence can be proven," Kalisch said in a statement. "I, however, lean toward the non-existence."

He told the Star he holds the same position regarding Abraham, Moses and the other Jewish patriarchs, as well as Jesus Christ.

There have been threats, campaigns for his dismissal from his post, and dozens of media interviews, commentaries and editorials. According to Der Spiegel magazine, a group of more than 30 German academics have signed a petition supporting Kalisch's right to scholarly freedom of expression.

The myth of Mohammed ... could be the product of a Gnosis, which wanted to present its theology in a new and original myth with a new protagonist, but actually is the old protagonist (Moses, Jesus). For the Gnostics it always was clear, that the issue was not historical truth, but rather theology. Moses, Jesus and Mohammed were only different characterizations of a mythic hero or son of god, who would depict an old spiritual teaching in mythical form.

Asked whether he thought his public airings of his findings will destroy peoples' faith, he said: "It will destroy a literalist faith, a faith no longer reliable because of reason. But, the God I believe in is not a god of literalists. He is the Ultimate One. God doesn't write books. All the various sacred books are the product of human minds and experiences. They can be helpful but they must be interpreted for today."

Kalisch maintains non-Muslim scholars who agree with his hypothesis but keep silent out of "respect" for Muslims are in fact treating them as though they can't handle the truth.

"That's not respect, it's putting Muslims on the same level as small children who can't think and decide for themselves and whose illusions of Santa Claus or the Easter Bunny one doesn't want to destroy."