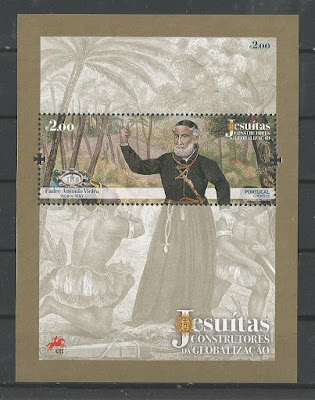 The Portuguese Post (CTT)  have just issued an edition on stamps on the Jesuits, which emphasizes the role of Portuguese  jesuits in the globalization process. In  the image Father António Bieira, who lived between Brazil and Portugal. Below, the text, in the brochure which goes with the edition. A beautiful "coffee-table" book book is due soon:

The arrival of the Society of Jesus in Portugal, in 1540, was one of the most significant events in Portuguese culture. In parallel with intercontinental missionary efforts, within just a few decades the Order, founded by Ignatius of Loyola, created a network of secondary education institutions, called colleges, and universities (it established the second Portuguese university, in Évora, in 1559). The Jesuits created the first education network in Portuguese history, based on a new teaching methodology and with links to learning institutions governed along the same lines in various parts of the world. The Jesuit colleges in Portugal, numbering thirty by the time the Society was expelled by the Marquis of Pombal, were spread across the major Portuguese cities, including Madeira and Azores and overseas Portuguese territories. When the Jesuits returned following that expulsion, and the others that followed, the Society's commitment to education, culture, and science continued to leave its mark on Portuguese history. An example is the Colégio de São Fiel, which was founded in the 19th century and attended by the first Portuguese Nobel prizewinner, Egas Moniz. It was also the founding site of the journal Brotéria, which is still being published today.

The Order of Saint Ignatius had a significant influence on Portuguese culture and society, educating figures who would leave behind significant works in various fields and help mould a true Portuguese identity. Five of these figures are highlighted below.

Saint Francis Xavier is particularly worthy of mention. Originally from Navarre, he became the first great missionary to the East during the time of the Padroado Português do Oriente (Portuguese Patronage of the East), and he is venerated in both Portugal and Asia. Xavier was a leader who attracted a multitude of followers. The great "Apostle of the Indies", as he was known, was fundamental in spreading Christianity to Asia and, notably, was a pioneer in the evangelisation of Japan. A founding member of the Order, he was central to the construction of an institution whose mission was global right from the outset.

Saint John de Brito was a 17th century missionary and martyr who lived in the Indian subcontinent. He developed a method of evangelisation that was based on acculturation, meaning he sought to adapt the Christian message to the local culture. Today there is a notable college in Lisbon that bears his name.

Father António Vieira also rose to prominence in the 17th century, in the New World. Dividing his time between the jungle and the court, he built bridges between the European and Amerindian civilisations. He became the great missionary of the Americas, his sublime preaching skills attracting large crowds. He also left a vast body of work of great literary value, with ideas ahead of his time. These works have just been published in 30 volumes by Círculo de Leitores. As well as elevating the Portuguese language to a level of perfection never before seen in prose (Fernando Pessoa had no doubts in bestowing him with the status of “Emperor of the Portuguese Language”), his prophecies, his political, social, and ecclesial reform projects, and his protests against the excesses of the Inquisition and the slave trade, continue to resonate even today.

A notable figure of more recent times is Father Manuel Antunes, director of Brotéria and professor at School of Humanities of the University of Lisbon, whose extraordinary classes were attended by thousands of students over the years. Considered one of the foremost Portuguese thinkers of the 20th century, he left behind a vast and varied body of work, which was recently collected and published in 14 volumes by the Gulbenkian Foundation. In his essays, he debated with great contemporary thinkers, modernising the language of culture in a manner that was both clear and profound. After the 1974 revolution, his book Repensar Portugal (Rethinking Portugal) made him an educator for the new Portuguese democracy.

Lastly, the late Father Luís Archer, also director of Brotéria and professor at the School of Science and Technology of the New University of Lisbon, who was a leading figure in Portuguese science. He was a pioneer in the teaching and research of molecular genetics and genetic engineering. He set up and directed the first Gulbenkian laboratory in this field, having educated generations of scientists. He chaired the National Ethics Committee for several years and wrote notable works on bioethics. His complete works are being published by the Gulbenkian Foundation.