THE JOANINA LIBRARY AND THE ARRIVAL OF THE TRAIN IN COIMBRA 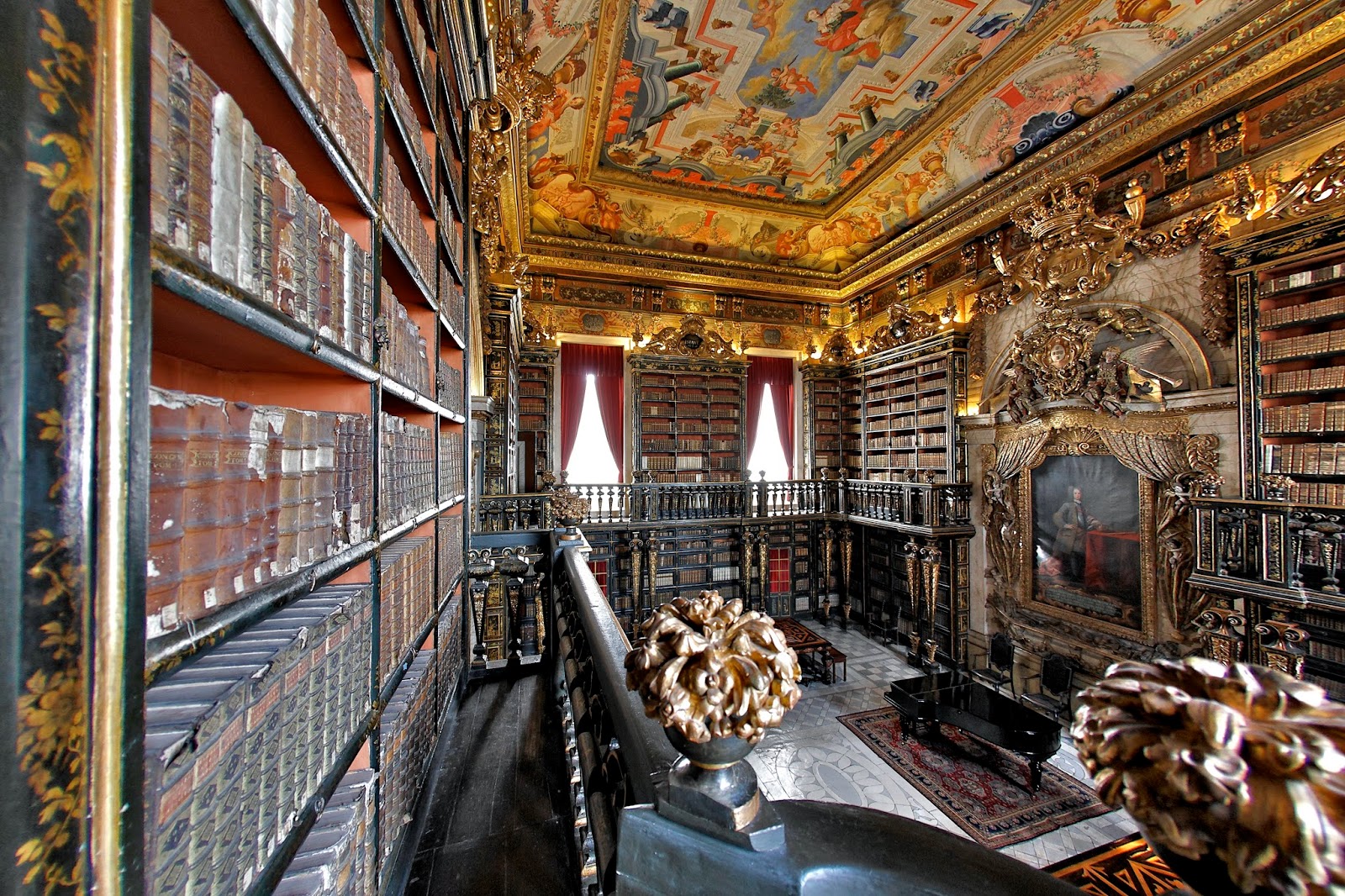 Some months ago I took part in a BBC documentary hosted by Michael Portillo about trains in Europe ("Great Continental Railway Journeys"). The film about Coimbra included an interview in the Joanina libary. Although it has not yet been aired but I leave here some of the answers I gave to BBC during the preparation:

Q- When was the Joanina library built – why  was it built, by who, what was its significance was?

CF- King’s John Library was built by the University, with royal permission, at the beginning of the 18th century – It was finished in 1728, just one year after the death of Isaac Newton (1727). Is is a temple devoted to Wisdom, celebrating the spirit of Enlightnment. The gold coming from Brazil was used not only to make an artistic masterpiece but also to fill up the shelves with books containing knowledge about the world. The decoration with Chinese elements refers to the enormous Portuguese empire, whose construction was a first wave of globalization. The volumes, some of them sent by Portuguese fellows of the Royal Society, contain not only the word of God but also the words the scientists could write about Nature.

CF- The library should be the mirror of the King, whose portrait dominates the library.  The Library should exhibit the power of the King. John the 5th was contemporary of Louis XV and he tried in his way to be like Louis XIV, the King Sun living in the rich palace of Versailles. This was the time of George I and II in England. He was a cultivated man, a man who like to read, who appreciated astronomical observations and scientific experimentation. He was also very fond of art, he hired some of the best artist of his time, like the Italian music Domenico Scarlatti.

Q-  What were the connections with the Royal Society of London?

CF- It is a kind of paradox but at the time of Enlightnment the Inquisition was still strong in Portugal. Jews were being persecuted. There was also some political persecution made by the Marquis of Pombal, the prime-minister which took absolute power after the big Lisbon earthquake of 1755, the Jesuits, who were ruling the University. Therefore some Portuguese intellectuals, including professors, priests and noblemen, were forced to emigrate. Some lived in London becoming members of the Royal Society and were sending books, instruments and ideas to the country.

Q- How this thirst for progress led in the 19th century to the building of the railways? How people thought that railways in themselves would bring progress?

CF- The first half of the 19th century was a time of decline. Napoleon invaded Portugal (Wellington was here helping the Portuguese) and the royal family went to Brazil. There was a political change. In 1822 the first Constitution was approved and there was a civil war between liberals and absolutists. Brazil got independent also in 1822 changing the Portuguese economy. Only in the second time of the 19th century there was some peace and money to make material improvements. There was the time of railways and the telegraph. The first train appeared in Portugal in 1856 in Lisbon. Eight years later it arrived to Coimbra (1864) and some 32 years later (1877) to Oporto. In fact the first railway company has British capital, having been established in London. Its sucess was limited since it went bankrupt in a few years. A line was also connecting Lisbon and Paris, through Coimbra, the famous “Sudexpress”, which started in 1877.

Q-  How the railways were enormously important to bringing books and ideas to Coimbra?

CF-  Through this line lots of books came to the library, containing new ideas, novels of the Realism, the science of Darwin, the positive philosophy of Comte. Eça De Queiroz wrote:

“Coimbra lived then a great activity, or rather a great mental turmoil. By the railways, which had opened the Peninsula torrents of new things, ideas, systems, aesthetic, shapes, feelings, humanitarian interests… , broke every day, down from France and Germany (through France). Each morning brought a new revelation, as it were a new sun. Michelet arrived, and Hegel, and Vico, and Proudhon; and Hugo prophet and judge of kings; and Balzac, with his perverse and languid world; and Goethe, as vast as the Universe; and Poe, and Heine, and I believe already Darwin and many others.”

The train also played a role in the modernization of the country, allowing quick travels to the interior and bringing goods tio regions which were isolated. The train as one iof the great symbols of progress. 6. How the educated liberal classes wanted change, but didn’t have the means to effect it. How that, together with the bankruptcies of 1890 and 1892 had a destabilizing effect on the country). A group of intellectuals in Coimbra thought they could modernize the country but they did not – among them the writer Eça de Queiroz – but they had later to confess that they failed. At the end of the 19th century the country was in bankrupcy and soon the monarchy would give place to a Republican regime.

Q- Is it true that there are bats in the library? What is their importance to the library?

CF - There are indeed some bats in the library and they are friends of the books since they eat the worms which destroy books. We try to keep the ecosystem with the bats and, in fact, the books are in good shape!
Posted by Carlos Fiolhais at 00:58