HOMEOPATHY: THE DILUTION LIMIT AND THE CULTURE OF CREDULITY 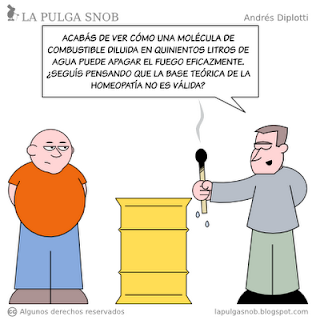 "Based in France, Boiron, a huge multinational maker of homeopathic-remedies, is suing an Italian blogger, Samuele Riva, for saying oscillococcinum, the company’s featured flu medication, has no active ingredient. Congratulations Sam, I gave up trying to get Boiron to sue me, years ago but the Center for Inquiry, of which I'm a member, is pleading «with Boiron to sue us. "Anas barbariae hepatis et cordis extractum," is listed as the active ingredient by the company. It’s prepared at a concentration of 200CK HPUS from the liver of the Barbary duck. The 200CK means the solution has been diluted 1 part in 100, shaken, and repeated sequentially 200 times. HPUS means the medication is listed in the Homeopathic Pharmacopeia of the United States, and prepared according to 1938 federal guidelines. It’s a national disgrace that the antiquated law sanctioning homeopathy, introduced by Sen. Royal Copeland, himself a homeopathist, is still be on the books. The dilution claim is totally meaningless. Somewhere around the 30th of the 200 sequential dilutions, the dilution limit of Earth would be reached, with the entire Earth becoming the solute. That is, the possibility of even one molecule of the duck-liver extract remaining in the solution beyond that point would be negligible. Long before the 200th dilution, the dilution limit of the entire visible universe would have been reached. This is all quite meaningless. Astronomers put the number of atoms in the visible universe at about 10 to the 80th power. It would take many universes to get to a dilution of 200 C."