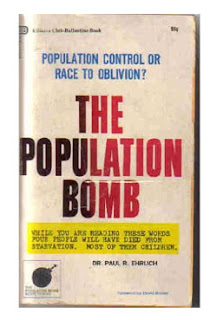 POPULATION: THE BOMB IS STILL TICKING:

Libertarians are fond of pointing out that John Holdren, the President's science adviser, collaborated with Stanford biologist Paul Ehrlich (The Population Bomb). Shocking! Ehrlich’s best-selling 1968 book predicted mass starvation by the end of the 20th century due to unconstrained population growth. Ironically, the major health problem in the US today is an obesity epidemic. But not everyone lives in the US. Two technological developments postponed the looming catastrophe: the green revolution for which Borlaug was awarded the Nobel Peace Prize in 1970, and the Pill. In most industrialized countries the Pill has brought the fertility rate down to about 2.1, needed for a stable population. In Muslim nations however, which suppresses women’s rights, fertility is as high as 8.0 (Afghanistan).
Posted by De Rerum Natura at 13:58