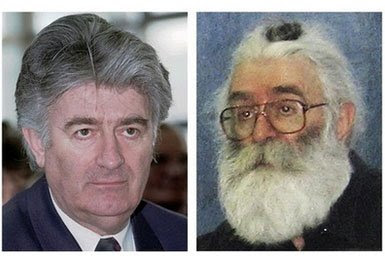 Da coluna electrónica "What's New" do físico Bob Park, da Universidade de Maryland, EUA, de ontem: ´
"METAMORPHOSIS: INFAMOUS SERBIAN FUGITIVE ARRESTED. Thirteen years after his indictment in connection with the Srebrenica massacre and the deadly siege of Sarajevo, Radovan Karadzic was found with a beard and a new identity living openly in Belgrade. How could a mass murderer support himself for 13 years without drawing on his past? No problem. He practiced alternative medicine, which requires little more than a lack of scruples. He was fully qualified."
Posted by De Rerum Natura at 01:49